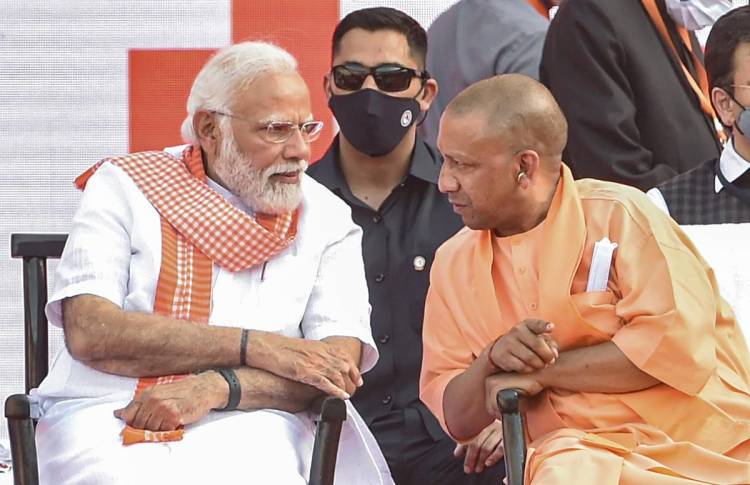 The swearing-in ceremony was held at Atal Bihari Vajpayee Ekana Stadium, the venue having the capacity to accommodate 50,000 people.

Yogi Adityanath took oath as Chief Minister of Uttar Pradesh, the first chief minister to do so for a second successive term after having completed a full five-year term in the State. Mr. Adityanath was sworn in along with 52 ministers including Keshav Prasad Maurya and Brijesh Pathak as deputy chief ministers.

Prime Minister Narendra Modi and chief ministers of BJP-ruled States as well as Chief Minister of Bihar Nitish Kumar were present at the function at the Atal Behari Vajpayee Ekana Cricket Stadium in Lucknow.

Of the 52, 16 were Cabinet Ministers, and 34 Misters of State. Almost 20 Ministers from the previous government (of whom 11 lost polls) were dropped in this exercise.

Balancing equations
The new Council of Ministers is significant not just in terms of the inclusions but the exclusions as well. Deputy chief minister Keshav Prasad Maurya, former party president of U.P. BJP was included despite losing his Assembly seat of Sirathu, a nod to the fact that he is an important OBC face of the party in a State where non-Yadav OBC votes have become the fulcrum of the contest.

Brijesh Pathak has been elevated as Deputy Chief Minister in place of Dinesh Sharma, both of whom are from the Brahmin community.

According to the list of inductees, the BJP's political focus in terms of community strength has been well reflected. Of the 52 Ministers, 21 belong to the OBC communities, and this list is dominated specifically by Kurmi MLAs, a reflection of the fact that the BJP did not do very well in the so-called Kurmi belt of the State in districts like Ambedkar Nagar and Kaushambi.

Upper castes have cornered 21 berths, with seven each for Brahmin and Rajput communities. Nine ministers belong to the Scheduled Caste communities. One Muslim minister, Danish Azad Ansari, and one Sikh, Baldev Singh Aulakh, represent the minorities in the list.

"The party's own assessment of data from the recent polls show that between the 2017 polls and the one in 2022, Congress, BSP and others lost 15% of vote share, and of this only 2.5% came to the BJP; the rest went to Samajwadi Party and its allies. About 110 seats were lost with less than 10% of votes polled, of these 68 were won by the BJP and 33 by SP and its allies, a situation that is worrisome and requires remedy. The representation in the Council of Ministers reflects these concerns," said a senior office bearer of the BJP involved in U.P. affairs.

Delhi-Lucknow ties
A big issue that arose during the polls was that the State government needed to also take along workers and other leaders of the party with varying equations with the Centre. The inclusion of former bureaucrat in the Prime Minister's Office (PMO) A.K. Sharma is not just an acknowledgement that he worked at handling the outbreak of the second wave of COVID19 in the Varanasi- East UP area but also at quelling all speculation that Chief Minister Yogi Adityanath was not comfortable with someone with a close relationship with Delhi. The dropping of Mahendra Singh, former minister for water resources and considered very close to Yogi Adityanath is also aimed at appearing even handed.

In his address to the BJP’s legislature party meet on Thursday following his election as its leader, Mr. Adityanath had mentioned the word “team work” at least thrice and referred to Prime Minister Modi as occupying the space of an “ abhibhavak” or parent like figure. The Council of Ministers taking charge in Uttar Pradesh shows the party’s imprimatur, the shadow of the upcoming General Elections in 2024 very much evident.

From Jammu to Kanyakumari, with 50,000 garage tie-up across 238 National Highways...

Yamaha reiterates its commitment for a healthy ecosystem

TPV Technology Announces the Availability of the Revolutionary...

Taking the consumer television viewing experience to the next level, TPV Technology...