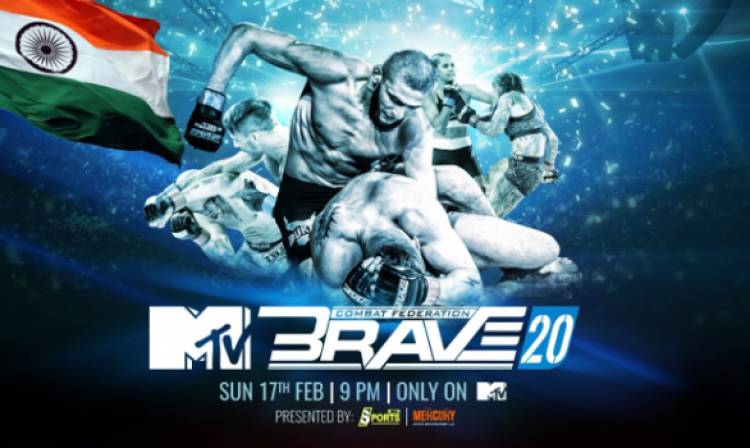 Mumbai, February 14, 2019: MTV, India’s No.1 Youth Brand, in association with the Brave Combat Federation is all set to bring the much-awaited fight series ‘MTV Brave 20’, presented by Mercury Sports Entertainment, on 17th February at 9 PM on MTV. The two-hour episode will showcase the epic fight that took place in Hyderabad on 22nd December 2018. In addition to the special episode, the channel will also air the fight episodes from all the 23 seasons, MTV Brave Series, starting 25th February, Monday to Friday at 10 PM on MTV, also available on VOOT.

One of the largest Mixed Martial Arts (MMA) organizations in the world, Brave Combat Federation is the truly global and fastest growing MMA promotion in history, it is also the strongest sports media property in the Middle East. As a sport that is rapidly gaining mileage in India, Brave Combat is the only federation offering a true global platform in the country. With an increasing growth in the content consumption for Mixed Martial Arts especially among the youth, MTV Brave provides a perfect platform to explore the hidden gems and drive positive perception towards Mixed Martial Arts as a budding sport in India.

MTV Brave will provide a perfect blend of entertainment and intense fights with some of the most influential MMA fighters like Abdul Muneer, the star of the first-ever Indian super fight who has several boxing championships to his credit. A vicious striker, Muneer is known for his charismatic style and will be worth watching out for. Other fighters such as Mohammad Farhad and Kantharaj Shankar Agasa are pioneers in the field of kickboxing and Judo, respectively, and successfully made their transition to the MMA cage.

11 killed as bus plunges into canal in Andhra

11 killed as bus plunges into canal in Andhra, At least 11 persons were killed and...